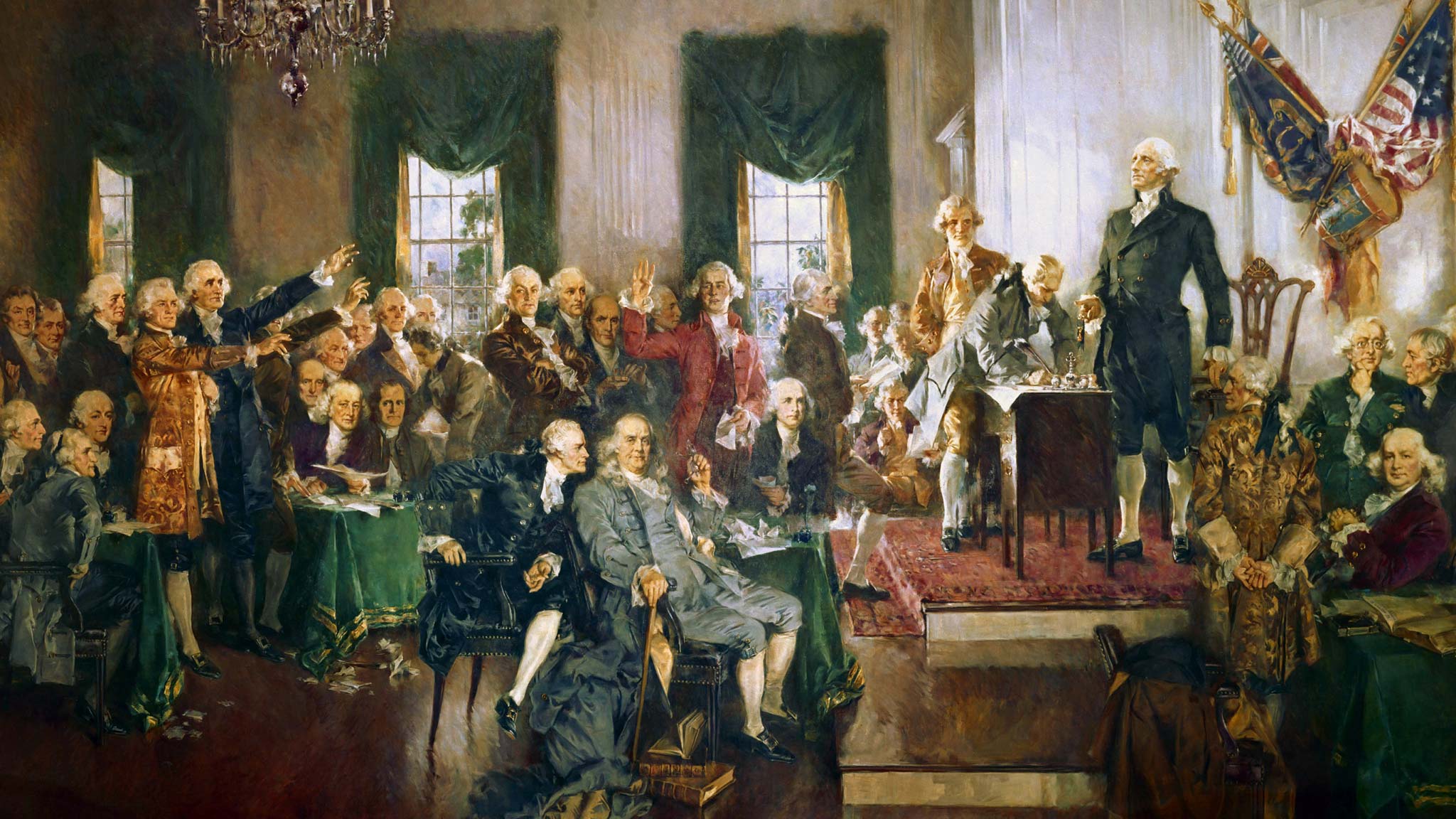 Grand Convention at Philadelphia, May to September, 1787, Quill Project 2019 Edition.

View introduction »
The Constitution of the United States of America was written by a Constitutional Convention held in the summer of 1787. Between May and September, a group of delegates from most states met to debate in secret to negotiate a text that was then presented to the states of the Union.

They adopted a formal process for their discussions, considering precisely worded motions in a series of sub-committees as well as in the main Convention itself. The formal – sometimes even pedantic – nature of this process is what has enabled the reconstruction of events offered here.

The most important of these subordinate committees was the Committee of the Whole House, which met during the first weeks of the convention and involved every member of every delegation. The report of that committee was then reconsidered in detail by the same members sitting as the Convention itself, which gave them a second chance to consider the same issues. Some controversial issues were sent to smaller sub-committees, and then the whole report of the Convention was sent to a Committee of Detail. The report of that committee was then reconsidered clause by clause in the main Convention, with some final work and redrafting being done by smaller committees.

The work of the Convention is preserved in the Official Journal, as well as in a number of privately kept diaries. For any requested moment, the Quill platform enables the process of debate to be examined in detail, reconciles the various motions presented to the Convention with the votes that have been taken, and reconstructs as accurately as possible the texts as they would have been available to members of the Convention at the requested point.

The model presented here is chiefly based on the 1911 publication, Records of the Federal Convention of 1787, by Max Farrand, with some modern additions. The new 2019 model, created and edited by Kieran Hazzard and Lauren Davis, is a significant revision to the 2016 publication by the Quill Project. This edition builds on the previous edition, created principally by Grace Mallon, while taking in to account recent publications and scholarship. The new edition is much more detailed, accurate and comprehensive, while employing a modelling philosophy designed to present the events in an easy to understand format. This edition also takes advantage of new technological features and developments within the Quill platform and has integrated additional material that could not be included for the 2016 proof-of-concept. The result is a more consistent and complete presentation of the surviving records.

There are several major additions and improvements to the modelling of the Convention undertaken in this edition. These include the integration of a greater range of sources in recreating the events of 1787, such as Lansing’s Notes, and the large body of material collected by James Hutson in his Supplement to Max Farrand’s The Records of the Federal Convention of 1787.

Frustratingly, the work of the Committee of Detail and that of the other subcommittees was not recorded by the committees, either officially or in any extant private diary. Where it has not been possible to reconstruct the exact work of a committee, the available texts (at least, for example, the committee's final report) have been presented instead. However, this edition has modelled the documentary reconstruction undertaken by William Ewald and Lorianne Updike Toler in the Pennsylvania Magazine of History and Biography , Vol. CXXXV, No. 3. This has resulted in a much clearer picture of the process of framing a constitution which took place in the Committee of Detail.

There are several new resource collections available to readers. Those looking for the rival plans proposed to the Convention or the major milestones reached as the final document took shape will find these easily available. We have taken the decision to include information about the informal meetings of delegates that took place outside of the official structure of the Convention. These meetings are attested to in diaries and private correspondence – though because of their nature, no presentation of such meetings can ever be complete. These fringe meetings give an insight into the side-line strategizing and negotiating, as well as the social events and friendships which existed between delegates.

The final major addition is an editorial commentary on the veracity of Madison’s Notes. Mary Sarah Bilder’s book, Madison’s Hand, details the reasoning, method and evidence behind the editing which Madison undertook several years after the Convention. As his notes are the main source of information for what was said in the Convention and many of its decisions her work has significant implications for our understanding, particularly in the last two months, after several of the earlier dairy writers had left. Within the model, all of the additions mad by Madison identified by Farrand, have been placed within angle brackets. The commentary will help readers to find where Madison made larger changes and the nature of these changes according to Bilder’s account.

A number of editorial choices have had to be made throughout, and these are explained more fully in the descriptions throughout the work and in separate editors' notes that explore more difficult and technical points of detail. In modelling the work of the Convention, the starting point remained the official journal, kept by William Jackson, the Convention's secretary. Which was compared to the other surviving records of each day, in order to reconstruct the process and debates which took place.

In only extremely rare instances (at least in the plenary sessions and the Committee of the Whole) is there any difficulty in reconstructing the wording being considered by the Convention. No significant discrepancies exist between surviving accounts. On the other hand, reconstructing the exact sequence of events within each session proved more difficult. Jackson in particular took liberties with that aspect of the record. Where any ambiguities exist, they are explained in the editors' notes. For the most part, however, the sequence of proposals and decisions can be confidently reconstructed from the surviving sources. Where ambiguities remain, it is as much the result of a slightly confused and (even for participants) confusing process during the final stages of revision, as they are a result of deficiencies in record-keeping.

An overview of the tools available for exploring these records is available below .

This view offers a set of tools to examine shifting alliances. 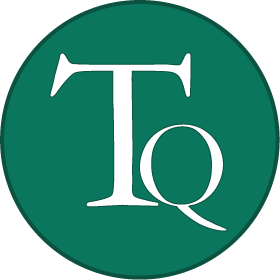 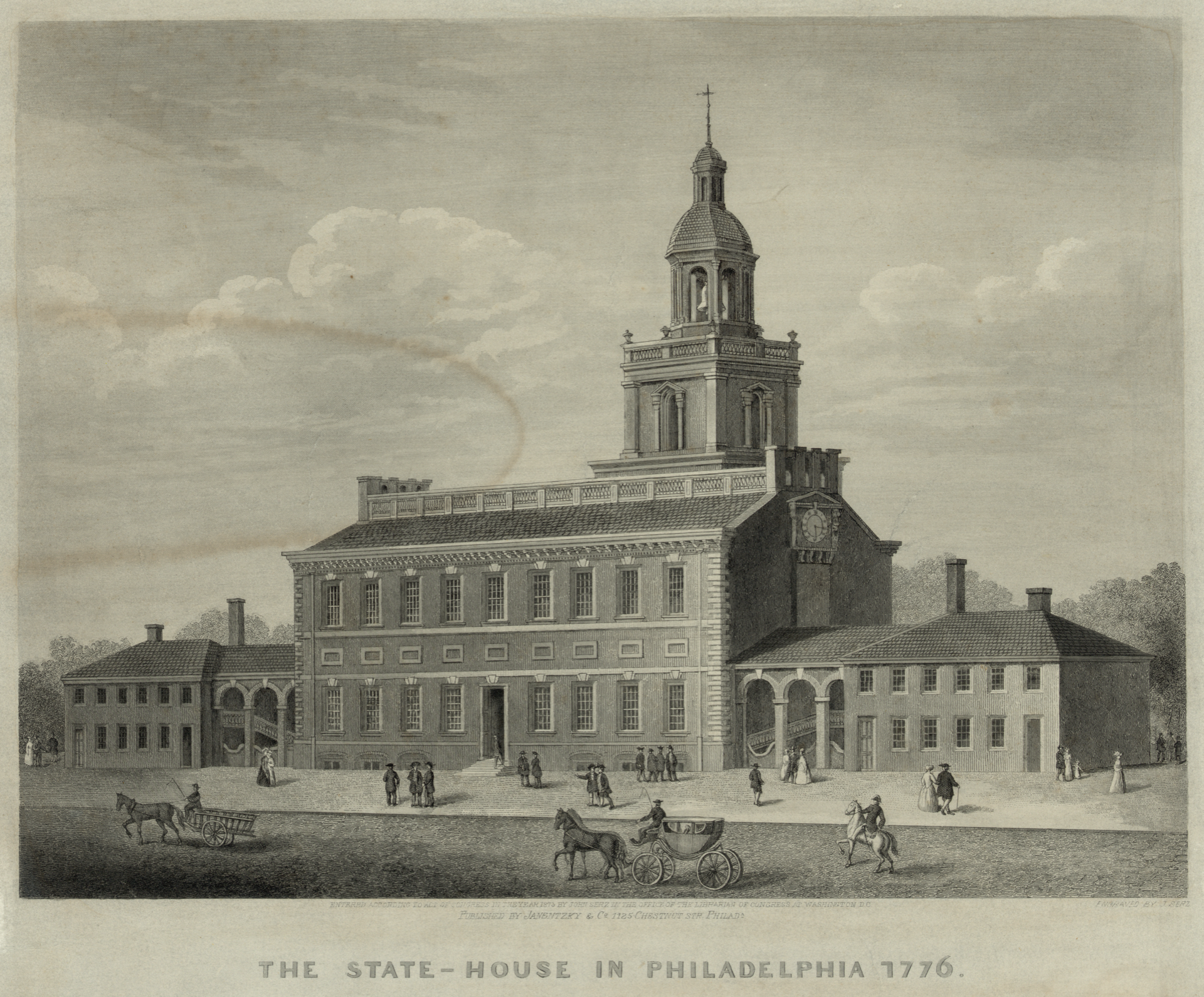 Details of unofficial meetings, discussions and social events held by delegates to the Convention.

Drafts and Editions of the Constitution, August-September, 1787

This collection holds links to images of the Library of Congress copy of Madison's Notes. These colour images were newly available in 2018.

Archive.org copy of the 1819 Journal Publication

In 1819 John Quincy Adams oversaw a printed publication of the Journal of the Convention. This collection holds links to the Archive.org copy.

Archive.org copy of the 1819 Journal Manuscript

In 1819 John Quincy Adams oversaw a printed publication of the Journal of the Convention.

This is a manuscript copy of the journal from that time, a draft of what was published.

Sherman's Proposed Report from the First Committee on Representation

Roger Sherman's proposal in the First Committee on Representation, which demonstrates how Madison's proposed amendments could be amended and included as a supplement to the Constitution. 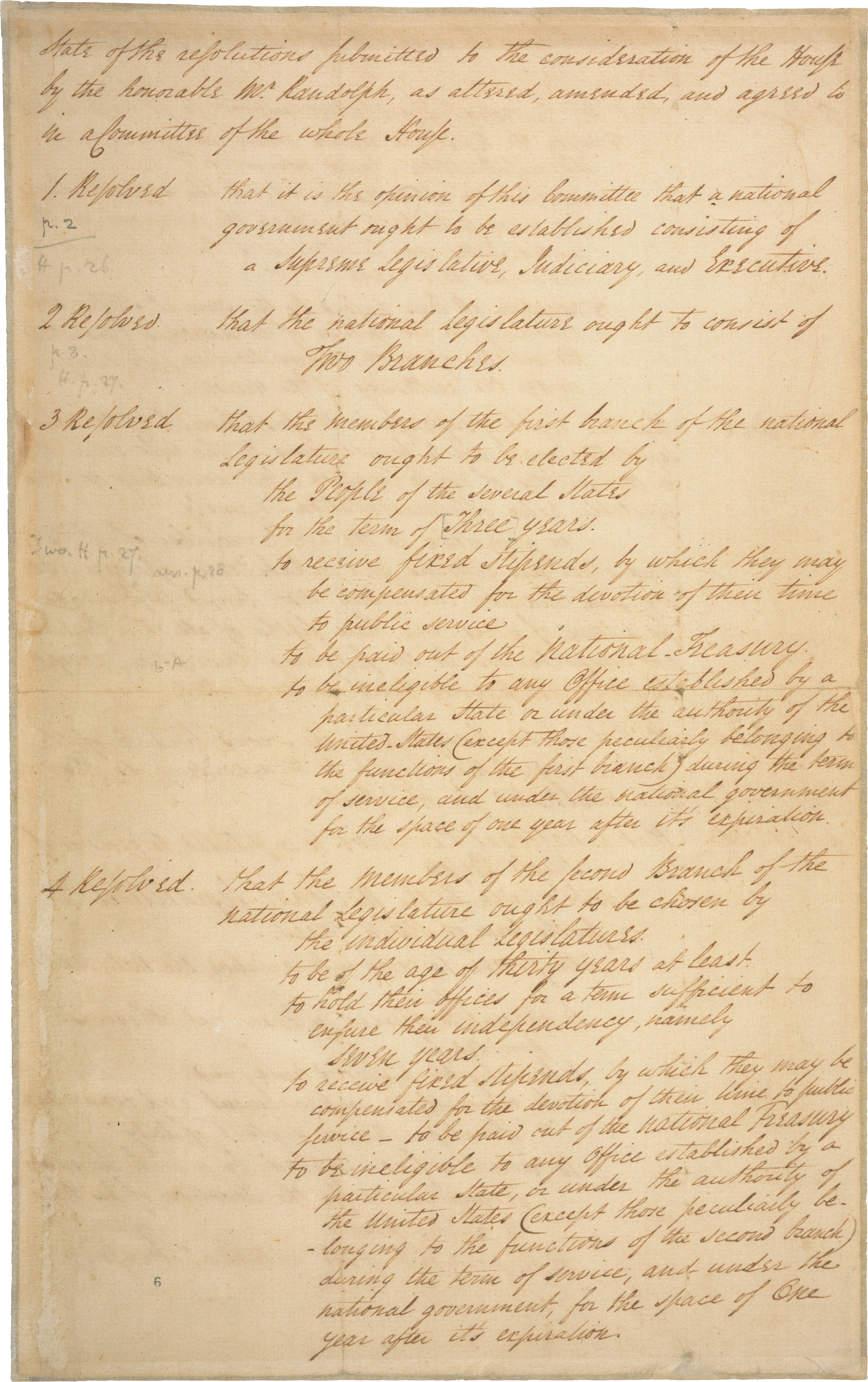 Transcriptions of the differing versions of the Virginia Plan, Pinckney Plan, New Jersey Plan, Hamilton Plan, and others, for comparison. 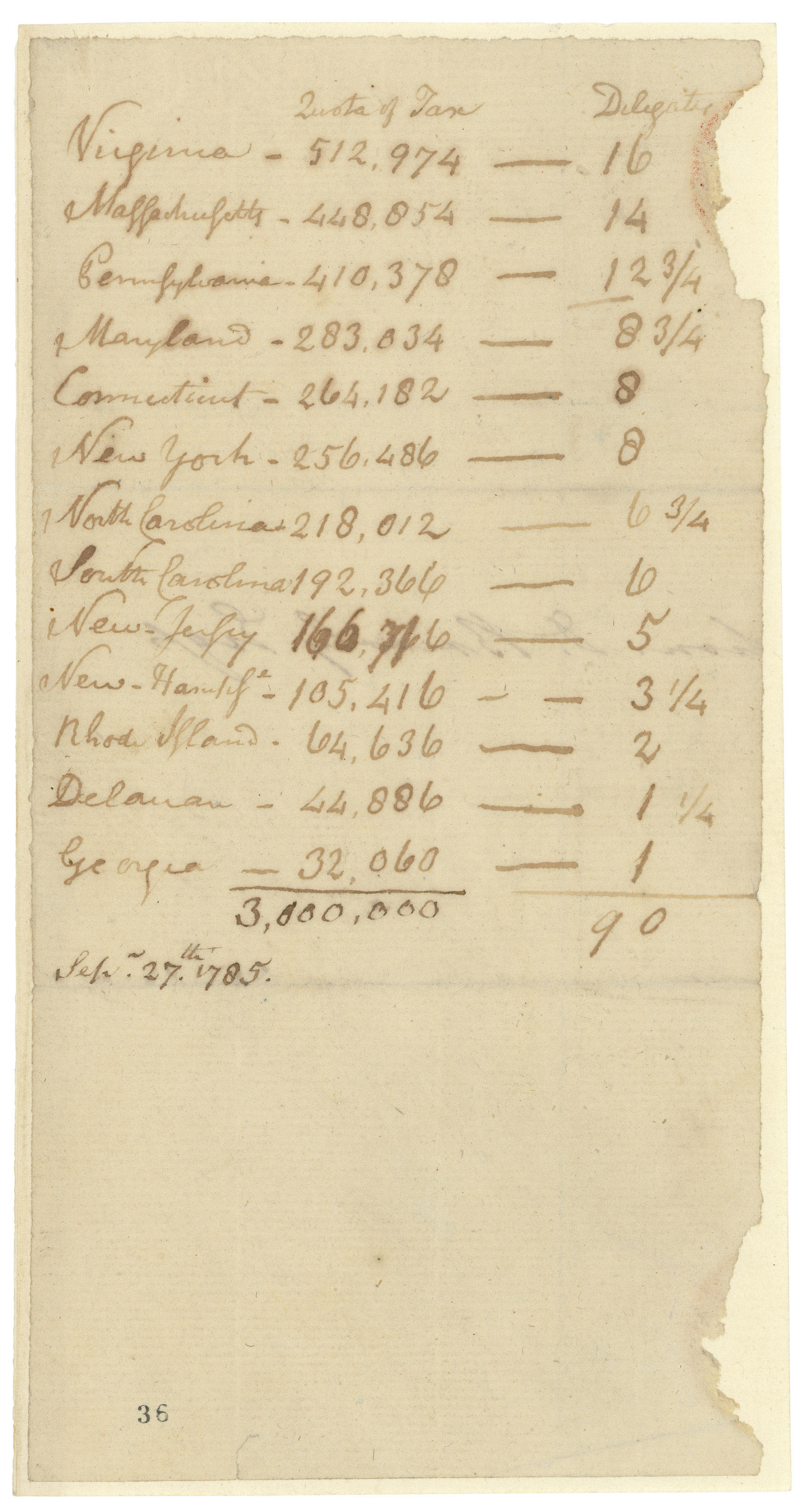 A collection of tables of population for each state presented to the Convention to inform apportionment of representation.

Constitutional History in the news and in scholarship, and news about the Quill platform and the Negotiated Texts Network. 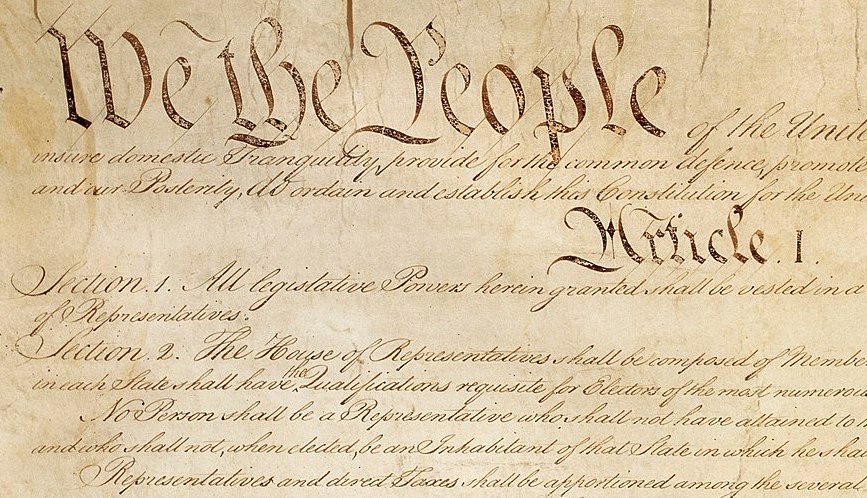 Charts the main stages in drafting the Constitution, and contains the major documents produced by the Convention, allowing for quick comparison. 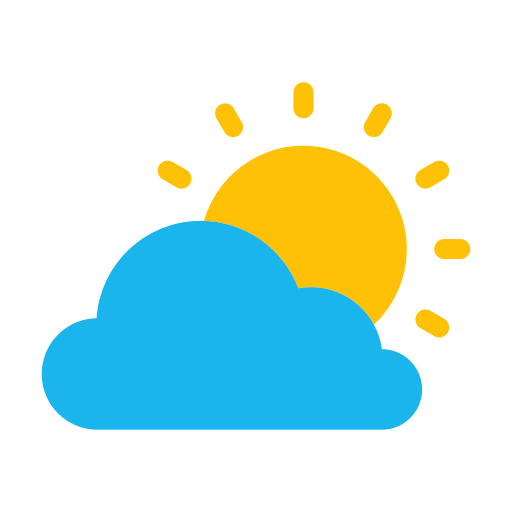